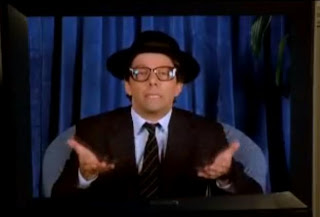 Why pay so much money to Jay Leno or Conan O'Brien when you can have Seinfeld's rabbi?

After all, he'd be just as good at spreading gossip and betraying confidences, and he has experience as star of a late-night cable TV advice show.  The rabbi who can't keep a secret was a highlight of episode 112 of Seinfeld, which aired on Sept. 28, 1995.


Not since Bishop Fulton Sheen and his Life Is Worth Living, airing opposite Milton Berle in the '50s, has there been a man of the cloth whose ecumenical excellence could pulverize ratings from the proscenium/pulpit.


With his concern for Elaine's welfare and effort to put her at ease ("Can I offer you some kasha varnishkes?") after word gets out -- actually the rebbe is the one who leaked it -- that she was jealous of George getting married, it's easy to see how the affable if ineffectual chatterbox rebbe may just be the one to slip into those 11:35 p.m. slippers that seem suddenly too outsized for others.

Remember how Carson's comments could cause headlines the next day, his Tonight Show quips and cracks wickedly funny water-cooler fodder?

Just give Glickman a golf putter and watch him become the nation's new yenta.

Check out the episode highlight below and decide if the rabbi is a contender for the Tonight Show!

A tip of the kippah to David Weitz for bringing this story to our attention.